Isn't it amazing how life so frequently goes round in circles? None less so than in Outdoor Learning where the use of stories has been quintessentially a core element in being outdoors.

So, sitting round the Carbeth Fires in the mid years of the 20th Century is just one of the many billions of social and formal settings including our parents' knees where the telling of and listening to stories has been and, for as long as our specie of animal retains the power of speech or any form of person-to-person communication, will always be THE most important form of learning. 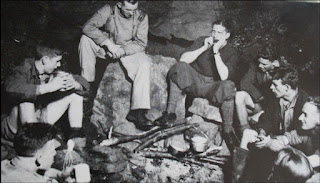 So, it is interesting to have read at least three emails from different groups I have chosen to be a member of, each extolling the beauty and intensity of engaging participants in story-telling. It's a pity that one presenter has hijacked what is common to most experienced practitioners by personalising the intrinsic value of storytelling as if it is a new discovery;

I quote: I have found that where there is truth or emotional impact a story can make
a positive and lasting difference.


but I am sure s/he is exceptionally well intentioned and perhaps stating the obvious is not so patronising as it might first seem because modern education is becoming saturated by number crunching or as it is called in Scotland; Tracking and Monitoring.

The burning obsession amongst both our politicians and senior education managers to be able to prove both their value and the success of their policies has lead to a dire and demonic drive for a relentless demand of streams of data-based evidence of the impact from each and every learning experience where creating, imagining and longer-term impact don't fit.

It's no wonder that the outdoor learning industry feels it needs to keep re-stating the obvious. As learning becomes ever more reduced to assessable outcomes, creativity and free-thinking become side-lined in the world of school curriucula by those who purport to want the very best for young people.

Our bean-counters, political managers and blinkered education leaders need to be constantly reminded of what anybody involved in the creative subjects knows: stories are the core of human communication and the significance of stories is an irreplaceable facet of human history not to be tampered with nor replaced by digital 'intelligence' and policies which value learning in terms of 'money spent = output achieved.
Posted by andycloquet at 00:45