Well, that's 10 courses completed both day and night with over 60 participants now at least a wee bit more confident in navigating. Instead of relying on others to lead their journey, they can now take an invaluable role in planning and following a route, making adjustments as the day progresses and take a lead if necessary. Great achievements for everyone!

My least successful day was when we were standing by a reservoir and I saw a large shadow move over my group. Without bothering to check it out, we moved off only to speak with a Game Keeper some few minutes later who asked us, "Did you see that Osprey taking off ?"

Most successful was my day with young learners from Alva Academy who were supported from the excellent staff in the school's Austism Department. Each youngster achieved a Bronze Youth Award from National Navigation Award Scheme and had a damn fine time running around the Gartmoron Woods!

Interestingly, I had two participants who had problems with recently bought compasses 'reversing their polarity' - instead of the red end of their compass needles pointing North, they wavered around either side of South! I think the problem was carrying their compasses beside their mobile phones. 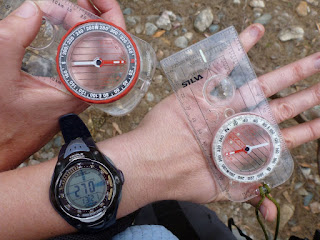 The issue has been noted ever since compasses have been around but since the boom in hillwalkers carrying a myriad of digital devices, the problem has become very noticeable.


The image to the right shows a digital watch positioned with a readout @ 270*, the rid rimmed compass shows the needle @ Mag. North (so the user is facing W, too) whilst the compass on the back of the user's hand is showing the needle pointing virtually South. To mis-use the navigator's mnemonic, 'Red Fred is not in her bed!@....and if you want to know more about what Red Fred is is doing out of her bed, then come along to one of my courses.

Navigation Courses with Outdoor Adventure Scotland
Posted by andycloquet at 04:54 No comments: